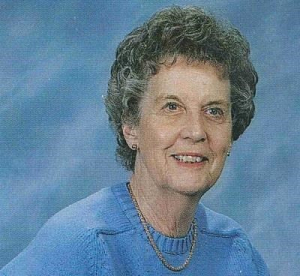 Kathryn, or “Kay” as she was known by her friends, was born Nov. 8, 1926, in Cape Girardeau, Mo. to Phillip H. and Emalie (Illers) Steck. Kathryn graduated from Southeast Missouri State University (SEMO) in 1948 with degrees in physical education and art. While at SEMO, Kathryn was active in the Womens’ Athletic Union, CLIO (a social organization), Black Mask (drama), and was Homecoming Queen.

Kathryn met James Clinton “Mac” McLeod at SEMO, where he enrolled after returning home from World War II. The two were married on Jan. 1, 1948. Both were lifelong public school teachers.

The couple did not have children, but Kathryn nurtured and encouraged many students throughout her 53 years of teaching and after her retirement from teaching at age 74.

Kathryn and Mac started their careers in Columbia, Mo. at Columbia Public Schools, where she taught physical education at both Jefferson Junior and West Junior High Schools for 24 years, from 1948 to 1972, and he was a successful boys’ basketball coach at Hickman High School, winning a state championship in 1962. Kay was a devoted Kewpie fan and lent great support to Mac’s teams.

When Kathryn and Mac moved to El Paso in 1972, Kathryn was hired to teach art at Jefferson High School. After Mac’s death in 1975, she remained in El Paso and continued to teach art until her retirement in 2001.

She enjoyed travel with friends during the summer months and taking art classes in Missouri and the Southwest, including a class with the Native American potter Maria Montoya Martinez. She collected Martinez’s pottery and art. She was also an accomplished weaver herself.

In retirement, Kathryn worked with International Baccalaureate students and volunteered with various organizations, including the El Paso Police Department, which honored her with the Commander Excellence Award in 2006 and 2007. She was active in her church, Ascension Lutheran Church. Kathryn also enjoyed knitting and other handiwork. She made a countless number of blankets for Project Linus.

Among her honors, she received the Columbia Public School Foundation’s Hall of Leaders Retired Educator Award in 2013.